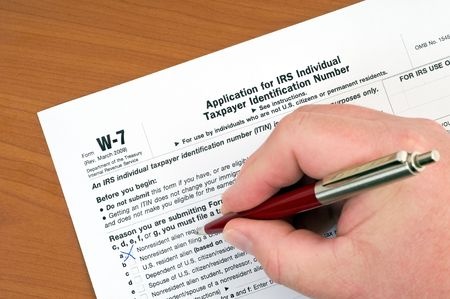 The 2015 Protecting Americans from Tax Hikes Act (the 2015 Path Act) has modified both procedural requirements on obtaining new ITINs and prescribed terms of the existing and new ITINs.  The new rules are codified in the newly introduced Section 6109(i) of the Internal Revenue Code and are effective after December 18, 2015.

Under the new rules, the requirements for an ITIN application differ whether the applicant resides in the US or abroad.  For applicants residing outside the US, the IRS allows to submit an ITIN application either (a) in-person to an IRS employee or a designee of the Secretary at a US diplomatic or consular post or (2) by mail with the IRS.  The IRS is responsible for establishing procedures on submission by mail.  It appears that there are no significant changes with the types of documents for proof of an applicant’s identity, foreign status and residency.  Either original or certified copies should remain valid.

Under the 2015 Path Act, the ITINs will be differentiated between all-purpose ITINs and treaty-benefits ITINs with distinguished numbers.

The new provision changes how long ITINs will remain in effect.  For an ITIN obtained as of January 1, 2013 or later, it should become permanent for as long as its owner has filed a federal income tax return (claimed as a dependent on a return) for three consecutive tax years.  Failure to meet the three-year reporting window will cause the ITIN to expire on December 31 of the third consecutive tax year.

For ITINs issued before January 1, 2013, the expiry date is determined based on whether or not a tax return has been filed for three consecutive tax years.  If not filed, the ITIN invalidates on the earlier of the two: (1) the last date of the third consecutive tax year or (2) December 31, 2015.  For filed returns, the ITINs are scheduled to expire on a staggered schedule between 2016 and 2019, based on the issuance year (pre-2008 through 2012).  Unless, timely renewed, no pre-2013 issued ITINs will be valid past 2019.

Considering that the condition for an ITIN retention under the new rule is a three-year filing requirement of an income tax return as opposed to other disclosures, such as Form 8840, Closer Connection Exception Statement for Aliens, or Form 8843, Statement for Exempt Individuals and Individuals with a Medical Condition, taxpayers who wish to file the latter forms with an ITIN may want to start attaching them to 1040NR returns.

If the above changes apply to you and you need assistance in renewing an ITIN, please feel free to contact us here.

FIRPTA Tax Withholding is Scheduled to Increase to 15 Percent and Other Cha...

US Taxation of Foreign Students
Scroll to top