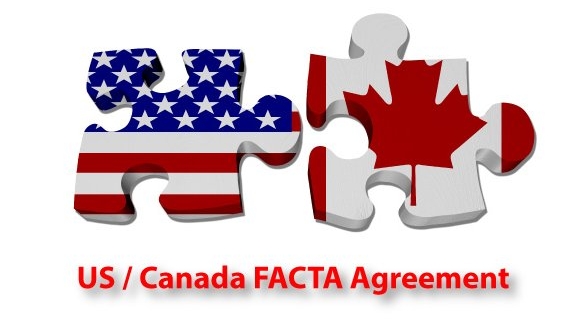 by Roy Berg U.S./Canada Tax Lawyer, admitted in both Canada and the U.S.

The following is a summary of an in-depth paper published by the Canadian Tax Foundation for its 2014 annual national conference, which you my find by clicking here.

When stripped of its soul-crushing complexity, FATCA—including the Canada-U.S. intergovernmental agreement (the IGA) and the Canadian implementing legislation found in Part XVIII of the Canadian Income Tax Act (the Act)—is designed to identify U.S. citizens, U.S. residents, and U.S. entities and encourage them to become compliant with U.S. tax and filing obligations by reporting them either directly or indirectly to the IRS. With the exception of children born of certain diplomats, all persons born in the U.S. become U.S. citizens at birth.[1]Thus, the clearest indicator of U.S. citizenship status is a place of U.S. birth.

Under FATCA, if an individual was born in the U.S. that individual is presumed to be a U.S. citizen, (and thus the account becomes reportable), unless the individual adequately rebuts this presumption. The Act and the IGA allow an individual resident in Canada the ability to rebut this presumption by providing a certificate of loss of nationality (CLN)[2] or, if the individual does not possess a CLN, a reasonable explanation for not having one despite having relinquished his U.S. citizenship. To date, no guidance has been issued by Finance, CRA, Treasury, or the IRS as to what constitutes a reasonable explanation for not having a CLN.[3]

In 2004 U.S. law  and under current U.S. law, an individual may have lost his citizenship for nationality purposes years ago, however he loses his tax-citizenship at the later of giving notice to the Department of State or receipt of a CLN. Thus under current U.S. tax law, individuals who may have lost their U.S. citizenship for nationality purposes years, or decades, ago may find themselves subject to current income tax obligations (because the U.S. taxes its citizens on world-wide income), FATCA reporting, and the expatriation tax regime because they failed to properly terminate their citizenship.

Importantly, FATCA and the IGA use the tax definition of U.S. citizen and not the definition that is used for nationality purposes.  Specifically subparagraph 1(1)(ee) of the IGA provides that the term U.S. Person means a U.S. citizen “interpreted in accordance with the U.S. Internal Revenue Code.” Thus appreciation of the manner in which citizenship is lost for tax purposes is critical to understanding not only rebutting the presumption of U.S. citizenship in particular, but also FATCA in general.

However, in 1967 the U.S. Supreme Court held in Afroyim v. Rusk, 387 U.S. 253 that the Fourteenth Amendment to the U.S. Constitution precluded the automatic loss of citizenship unless the individual performed the requisite action (or inaction) voluntarily and with the specific intent of giving up U.S. citizenship. Thus many individuals who had been stripped of their U.S. citizenship found it to have been restored retroactively. In light of the fact that the U.S. taxes its citizens on their worldwide income many individuals who had their U.S. citizenship retroactively restored faced tax and filing obligations for prior years.

The date the individual renounces U.S. nationality before a diplomatic or consular official, provided such renunciation results in the issuance of a CLN.

Thus, under current tax law, and therefore FATCA, the issuance of a CLN is required to terminate an individual’s U.S. citizenship for tax purposes.

Until further guidance is issued regarding what might constitute a “reasonable explanation” for not having a CLN, Canadian financial institutions will be in the unenviable position of attempting to interpret their customers’ explanations under both U.S. nationality law and tax law. Similarly, Canadian residents with a U.S. place of birth may attempt to obtain a CLN without fully understanding the tax and compliance consequences of doing so.

[1] U.S. CONST. amend XIV, § 1 (“All personyB born or naturalized in the United States and subject to the jurisdiction thereof, are citizens of the United States.”). See also 8 U.S.C. section 1401(a). Only children born of foreign diplomats with full diplomatic immunity are exempt from this rule. See INS Interpretation 301.1(a)(4)(i).

[2] “Certificate of Loss of Nationality of the United States” is found on U.S. Department of State Form DS-4083.

[3] An in-depth analysis of these issues, including historical developments, recommendations, and a working template for determining “reasonable explanation” is contained in the paper entitled FATCA in Canada: The ‘Cure’ for a U.S. Place of Birth available at https://www.ctf.ca/CTFWEB/EN/Sign_In.aspx?returnurl=/CTFWEB/EN/Secured_Content/2014/Annual_Conference/2014_Annual_Conference_Papers.aspx&IgnoreProfileRedirect=true.