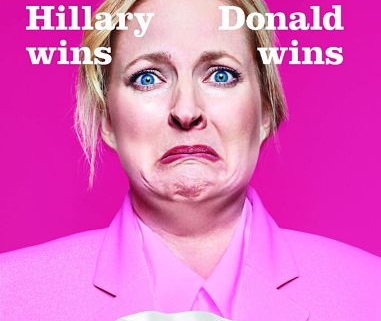 Walking through the TTC subway at Broadview or on many bus stops throughout the city, you will see a bright pink (brand name) tissue ad that will likely bring you to tears – pun intended.

The ad shows a woman crying, casting a frown, looking mortified with the words “Hillary Wins” to her left and “Donald Wins” to her right. Rather than showing the expected dichotomy of one side of her face showing happiness while the other side dissatisfaction, she is clearly equally displeased with the prospect of either candidate winning.

This ad provides some accurate and much needed comedic relief, capturing just how truly emotive this presidential race has been.

We all know the craziness surrounding both Hillary Clinton and Donald Trump. They have both been vilified in the media for lies, videos, scandals, and more. But what is more important and much less talked about are each of their tax plan proposals and broader business agenda for the next four years.

Tax is not the sexiest topic to discuss but it is one of the most important issues on the campaign docket (or at least should have been there). The most recent polls show that “The Trump” and “Pantsuit” (among their long list of monikers) are locked in a dead heat. As the race between them has intensified significantly over the last few weeks, polls showing the leading margins have narrowed. So rather than becoming embroiled with things or actions which are entertaining but slightly distasteful, let us focus on some of the key campaign tax proposals.

Is one’s business success a winning qualification for being president of the United States of America? Donald Trump seems to think so, which has lead some to have unwavering faith that his tax proposals will be nothing short of propitious for Americans, and even Canadians alike.

Tax cuts: Trump’s plan calls for substantial cuts in tax rates, although more of the “savings” will be realized by the wealthier taxpaying households.  He has said he plans to implement a “cross-the-board income tax reduction especially for middle-income Americans.”

Corporate Tax: His plan also calls for a lowering of the corporate tax rate to traditional corporate structures (in contrast to previously promised all business entities, including pass-throughs) to an even 15% from 35%, which would be extremely beneficial for business owners and future entrepreneurs. He also promises a 10% rate on a one-time repatriation of business profits held offshore – “All this money will come roaring back”.

Income Tax: Trump’s plan would simplify the current income tax structure to include just three tax brackets from the existing seven. The highest rate would decrease from the current 39.6% to 33% for taxpayers earning over $225,000.  The plan also provides for repeal of the alternative minimum tax and the 3.8% “Obama” Net Investment Income Tax. The standard deduction would increase to $30,000 for joint filers and the wealthy would face a cap on itemized deductions at $200,000 for joint filers.

Hillary often speaks about everyone contributing their “fair share” to society and her tax proposals reflect this narrative.

Tax cuts: Here is one of the biggest differences between the candidates. A Clinton election would be really expensive for the high net worth circle. For wealthier families, Clinton’s election means a significant tax increase. Her plan for raising taxes on the wealthy is supposed to generate more revenue for the government to be used on social services like subsidized higher education.

Corporate Tax: Hillary does not plan on changing the corporate tax rate in its current form. Nor does she plan on upsetting the status quo. All those businesses in industries that enjoy favorable taxation will retain those tax benefits. This includes real estate holding companies, mining companies, farmers/agricultural producers, research and development companies, and oil and gas developers.

Estate Tax: Clinton says she will increase the estate tax rate from 40% to 45% and lower the threshold that triggers the tax from $5.45 million to $3.5 million – most people don’t ever have to worry about this anyway. (Only about 4 in 1,000 of US residents and citizens are ever subject to the estate tax according to a 2016 National Public Radio report).

Income Tax: Clinton would not change the tax rates for anyone making less than $250,000 a year.

She does call for an increase of the minimum effective tax rate to 30% for anyone earning $1 million a year or more. She will also add an additional 4% surtax on incomes over $5 million, making a new tax bracket of 43.6% for ordinary income and 24% for qualified dividends and long-term capital gains. Such new bracket in reality  would cost taxpayers 47.4% and 27.8% once adding the Net Investment Income Tax which she plans to retain.  Hillary is also a staunch supporter of seriously limiting income tax deductions for the wealthy. This is her campaign hallmark.

According to the Tax Policy Center, this plan will result in 75% of the additional taxes levied would be paid by those in the top 1% of the income scale. (“The Donald” is much less vigilant in taxing those in the 1% club.)

Will the tax plans of either candidate actually benefit Canada’s economy?

Going back to the (brand name) tissue ad, while it is funny, it really opens up the discussion of US-Canada economic relations. The main focus is trade. The second focus is on Canadian investors.

Suppose Mr. Trump is elected, his American-centered rhetoric could be of some concern to Canadian markets since he claims he would overhaul international trade agreements such as NAFTA and the Trans-Pacific Partnership. Trump, taking a highly protectionist stance, will likely want to bring jobs and goods back into America and keep them there. Considering most of Canada’s exports go straight to America, a curtailment of such trade agreements could be quite unfavorable for Canada.

Madam Clinton also does not support the Trans-Pacific Partnership and has voiced very clear criticisms at current NAFTA agreements, even though the U.S. has benefited just as much as Canada with the increase in trade and cross-border investments from Canadians.

As far as Canadians investing in U.S. markets, Clinton is more widely perceived as the better choice for their portfolios because Trump causes too much divide and controversy throughout the world- this could make every economy more volatile as whole. Clinton is not likely to cause any disruption to current, profitable status quos, and herein lies her appeal to Canadian investors.

So when it comes to the question of who will make a better neighbour, it seems to be a draw. Only time will tell.

*Advertisment image shown above  is by Scotties Tissue

Weekly Q & A – What if my Previous Streamline Submission was Inc...

U.S. sues Vancouver dual citizen for over $1M for not reporting accounts
Scroll to top