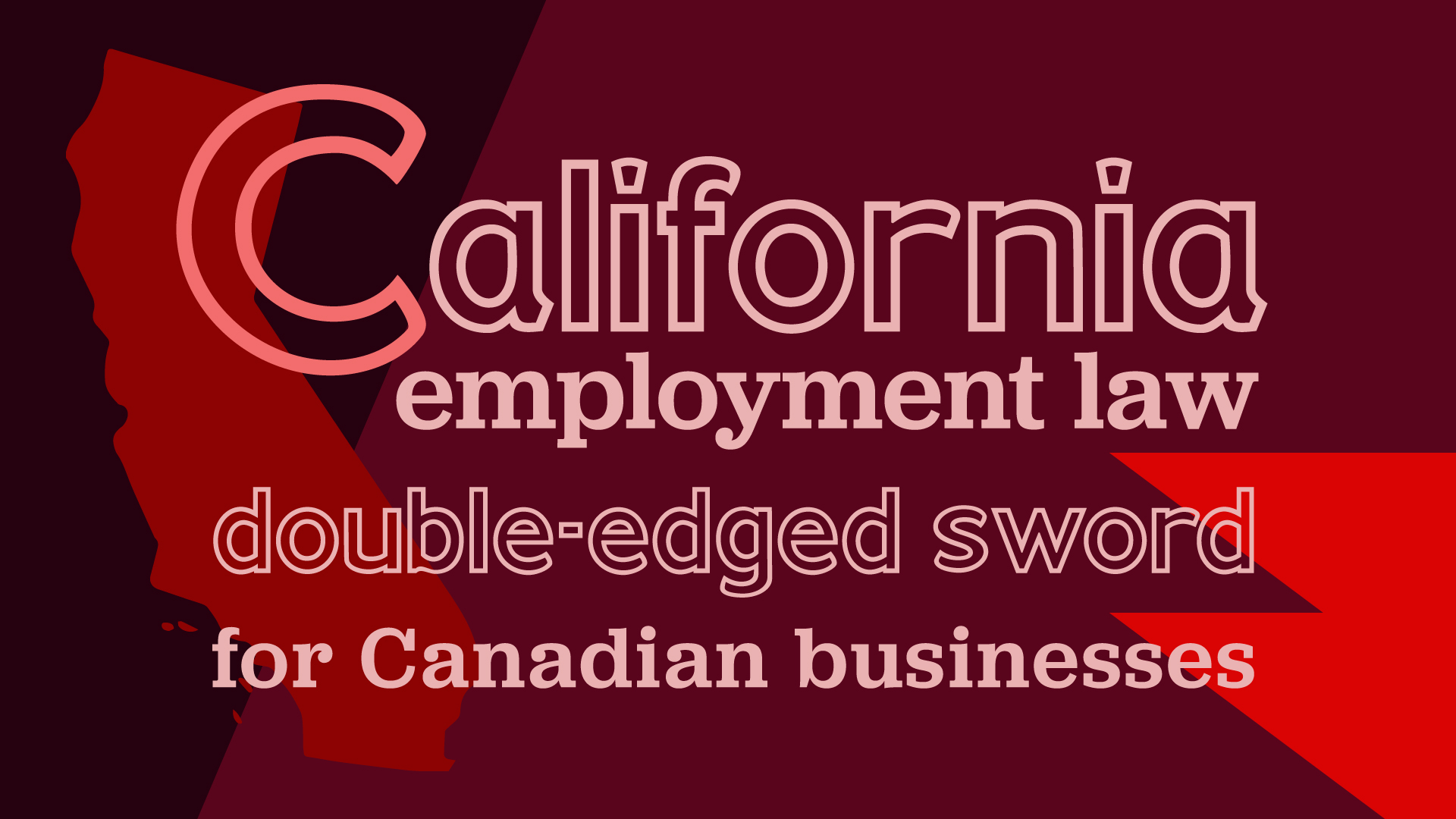 This article was originally published on October 9 2019 by The Lawyer’s Daily (www.thelawyersdaily.ca), part of LexisNexis Canada Inc.

California is one of the most employee-friendly states in the U.S. And it just got even more friendly to taxpayers by enacting a new law that will impact Canadians who do business there. The law can impact corporate entities and independent contractors in everything from the film industry to IT.

The new law is effective Jan. 1, 2020, and can apply retroactively. It is wide-reaching and will impact employers, employees, business-tobusiness arrangements, the withholding of income tax, social security tax, insurance benefits, employee rights, what have you.

The legislation came out of the Dynamex Operations West, Inc. v.Superior Court of Los Angeles (2018) decision, which involved codifying tests used in the classification of employees. People are referring to this new legislation as the “Uber” or “Lyft” law. But it encompasses more than ride-share services.

While the law does include exemptions for certain professional service providers, such as doctors, lawyers and accountants, other industries are affected. The entertainment and technology
industries are notorious for hiring independent contractors, instead of employees, for various reasons — flexibility, specific projects, remote work arrangements. However, California has found
that many “independent contractors” are bona fide employees, but without that troublesome payroll stuff.

California, like Canada, always had criteria for the classification of employees and independent contractors, and some of the criteria are still valid under the new legislation. But the tests have
been expanded.

The California Assembly Bill 5 (AB5) codifies and clarifies the decision in the Dynamex case to make it harder for payors to misclassify workers as independent contractors. They do this to avoid
payroll taxes (workers’ compensation, unemployment insurance, social security taxes) and minimum wage and benefits.

AB5 places the burden on payors to prove that a person is a bona fide independent contractor instead of an employee based on the following test:

Therefore, the relationship now defaults to employment and the payor must prove it is not that. The first point isn’t new. In fact, this test is consistent with that used by the Canada Revenue Agency in making the employee vs. self-employed determination.

The second point makes it more difficult to “hire” an individual as an independent contractor if the work done is similar to work performed by employees. While “normal course of services” is not specifically defined in AB5, you must have a strong case for classifying an individual as something other than an employee.

The last point offers a possible “out” if the person takes steps to create a bona fide business with other clients, and a distinct and separate business location and advertises as an independent
enterprise.

As far as the entertainment and technology sectors are concerned, people who operate as independent contractors but work exclusively for a “client” will default to having an employment
relationship unless the client can prove otherwise, based on tests laid out in AB5.

The “employee” now receives statutory protections arising from California’s labor laws, such as minimum wage, benefits, protected leaves and even legislation addressing the #MeToo
movement. However, this classification means the person cannot deduct expenses such as business use of the home, travel, supplies or equipment. Even if the employee lives in Canada and
works for Google, AB5 can still apply.

Once it is determined that the person is an employee it can’t be changed. Also, Canadian federal and provincial employment standards apply, even though the employer is based in California,
provided the employee lives and works in Canada.

While those in the technology industry tend to operate as sole proprietors and are classified as an employee under AB5, in the movie business entertainers, writers and producers usually operate
through the guise of corporations. This is called the “loan-out” corporation and means the entertainer is an employee of his or her own corporation, making them subject to labour laws.
However, they are “loaned” or “leased” to another company for a specific project.

While there is an exemption in AB5 for B2B arrangements, it is unclear how the loan-out strategy will survive post-Dec. 31, 2019. AB5 provides 12 requirements demonstrating that the
arrangement is a bona fide B2B relationship. Otherwise, the contracting business may be liable for the employees of the contractor. Whom the contractor provides services to is important and can turn a B2B relationship into an employment one.

According to guilds and unions of the entertainment industry, it should be business as usual.

For those operating as independent contractors, be aware that California has now defaulted to an employment relationship unless you pass the tests set out in AB5. It’s also a wake-up call for those working remotely as independent contractors because you are likely to be deemed an employee, especially if you have only one client who happens to be in California. While there are lots of obvious legal implications involving the employer-employee relationship, your tax filings will be fundamentally different as an employee.

Specialist vs. generalist – What kind of employee are you

Another Look at Taxing the Rich
Scroll to top